The new GIS (Geographic Information Systems) technologies are constantly evolving and are a valuable tool in the management and processing of complex spatial data referring to the protection of natural resources, biological monitoring, and the possibility of applying mathematical models.

CAA developed skills in GIS application  for mosquito integrated control and monitoring plans , for insects harmful to agriculture and waste management and biomass

The Geostatistics includes a set of statistical procedures that can be used to analyze and model the spatial relationships that exist in nature. Geostatistics allows assigning to ecological phenomena a position in space in order to produce graphical interpolation maps of various kinds (Kriging Interpolation ). Fundamental in geostaistics is the spatial autocorrelation that occurs when values of neighboring samples are more similar than those sampled at greater distances from each other. Spatial autocorrelation manifests itself in multiple scales and with different orientations, a common phenomenon in ecological data.

The spatial modeling includes the use of Remote Sensing (RS) that is a set of remote sensing techniques that allow the remote acquisition of qualitative and quantitative information (images) on phenomena or objects, without coming into contact with them. so-called Image Processing an enormous amount of environmental information can be extracted from these satellite images. In recent years the use of environmental variables extracted from Remote Sensing have been widely used to create precisely distribution models and abundance of animal and plant species and in the health field to create spatial models of arbovirus circulation, create epidemic risk maps on small , medium and large scale.

CAA has acquired skills in the development and application of satellite images, particularly in the field of biological monitoring and health surveillance. The images used by the CAA technicians are all open access (Modis, Landsat, STMR, Sentinel etc.) and allow the production of maps with resolutions ranging from 20-30 meters per kilometer.

During these years, CAA has acquired skills in creating and implementing WEB-GIS, ie Geographic Information Systems developed to be used and shared on the internet and geographic applications based on OpenLayer, Leaflet, Mapbox and Google Maps frameworks to dynamically interface geographical data with the contents of relational databases.

The geographic applications developed by CAA allow, not only to visualize, navigate and query the geographic data sitting comfortably on one’s PC or through tablets and smartphones, but also to create real-time data representation systems such as for example arbovirus risk maps, species distribution maps, etc.

In particular WebGIS are developed with open source technologies through QGIS server that provides a Web Map Service (WMS) using the same libraries as QGIS Desktop (www.qgis.org ). All maps and print layouts can be published online on a web-gis in a very simple and intuitive way. 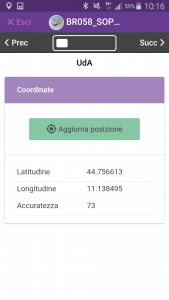 The term Mobile GIS identifies the Geographic Information Systems that can be used by portable devices such as PDAs or Tablet PCs as opposed to the so-called Desktop GIS, ie applications used in the office PCs.

Mobile GIS are able to perform a wide range of functions, including 5 are the most common:

CAA is working on using open source Mobile GIS on smartphones using QField (https://www.qfield.org/) and on developing specific APPs for collecting and sharing geo-referenced data in always via smartphones.